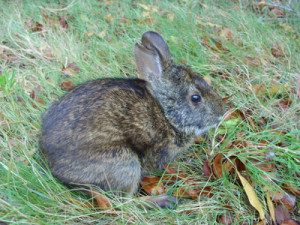 No, not those Playboy bunnies. Sylvilagus palustris hefneri, a marsh rabbit subspecies named for Playboy founder Hugh Hefner, has been on the endangered species list since 1990. Current estimates claim that there are only 300 of the rabbits left in the wild. The rabbits live in an island environment and feed on specific grasses and plants. Human encroachment has resulted in habitat loss and deaths by domestic animals and cars.

Fortunately, researchers at the University of Central Florida have stepped in to aid the rabbits. They are researching the genetic diversity of the rabbit population. They believe that the more diverse the genetic population, the greater chance of adaptation and survival. They hope to determine the most genetically diverse group of rabbits and relocate them to an undisturbed area to foster population growth.

This subspecies of rabbit was named for Mr. Hefner when it was discovered in 1984 to honor the donations made by his organization for field research on rabbits.