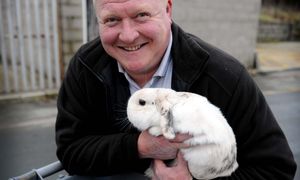 Paul Spereall with rabbit he discovered in trash bin. Photo by Jason Roberts.

In the past week, there have been multiple incidents of pet rabbits being discovered out with the curbside trash.

In Birkenhead, England (across the river from Liverpool), window workers Paul Spereall and  Paul Harvey went to toss a piece of garbage into one of the bins on the side of the road.  When they opened the lid, a cream-colored lop-eared rabbit jumped out at them.  The two men brought the rabbit back to their office and cared for it while they contacted the RSPCA.  The rabbit was dehydrated, but otherwise is good condition.

In Regina, Saskatchewan, the Hamel family discovered a pet bunny in a recycle bin out on the street with some hay and pellets.  With temperatures dipping to -16°F (-29°C) that night, the Hamels saved the bunny from a frigid demise.  After caring for the abandoned rabbit for the night, the Hamels contacted the Regina Humane Society. 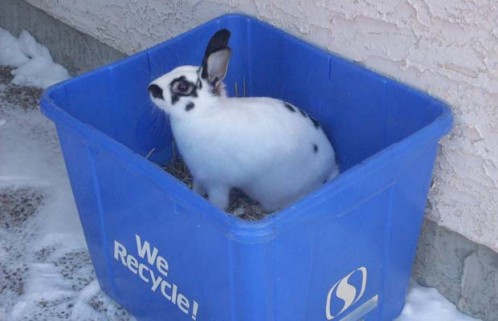 It is incredibly sad that stories of rabbits being abandoned out with the trash (or just set loose outside) keep popping up.  These two rabbits were lucky that a few good Samaritans discovered them, cared for them, and brought them to local shelters so they’d have a chance at a good life.

One thought on “Rabbits Rescued from Curbside Garbage Bins”