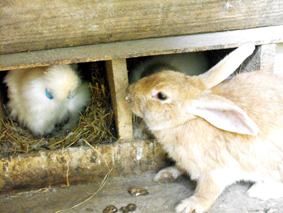 At Staglands Wildlife Reserve near Wellington, New Zealand, staff went to check for eggs under one of their silky bantam hens and instead found a litter of four baby bunnies.

The mother rabbit, who was out in the parklands, doesn’t mind the avian babysitter.

According to Jayson Davis, who discovered the babies, “The mother rabbit has no problem with it. They only feed once a day which is usually at night time but I have occasionally seen her in there with the chicken herself, and the babies. It doesn’t seem to be a lot of room in there but there’s never any bickering.”