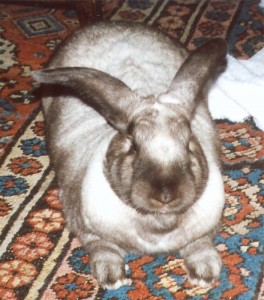 Here’s an excerpt of a sweet story in the SF Gate about a temperamental, yet artsy house rabbit named Rowley:

Ten years ago, when Eloise Jonas and Frank White saw the handsome rabbit named Einstein at San Francisco Animal Care & Control, they also caught the warning on his cage: “For experienced rabbit handlers only.”

Seemed the sweet-faced bunny had bitten everyone at the shelter, except, that is, for the supervisor – proof of the intelligence promised by his name. Partly out of concern that the naughty 1-year-old wouldn’t find a home and mostly because he was quite the looker, the smitten San Francisco couple adopted the bunny and renamed him Rowley.