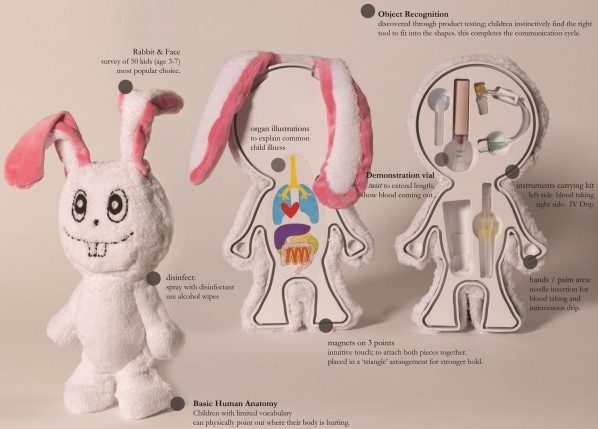 Rabbit Ray looks like a cute white rabbit toy on the surface.  But student designer Esther Wang Chunshu of Singapore has created much more than just a toy; she has designed a useful tool for hospital staff to communicate with child patients.

Rabbit Ray has several functions. On the outside, the cute rabbit face comforts kids.  In fact, its aesthetic was the most popular choice in a survey of 50 children.  Further, because it is structured similar to a human body, kids can point to areas on the bunny that correspond to where it hurts on their own bodies.

The bunny toy opens up to show a diagram of organs in the body.  This is useful for explaining common illnesses to children.  The other side houses tools for common procedures like drawing blood.  Medical practitioners can use these instruments on the toy rabbit to demonstrate the procedure to the children so they will understand and become more comfortable with the process.

The invention has been nominated for the James Dyson Award, which is an international student design award.  The focus is for students to “design something that solves a problem.”

UPDATE 11/1/12: If you have questions or would like to buy Rabbit Ray, you can email Esther Wang Chunshu at estherspeaks [at] joytingle.com.