Rabbits of a monumental size loomed over visitors to Boston’s Lawn on D last week. The whimsical inflatable sculptures were created by Amanda Parer initially for the Vivid Festival of Light in Sydney in 2014. Since then, the rabbit sculptures have traveled to festivals across the globe including stops in England, Belgium, Australia, France, Canada, Scotland, Denmark and Italy.

Although at first, the rabbits bring about a sense of childlike wonderment, upon closer inspection, the art elicits a more ominous feeling. According to Parer, “Intrude is about us, Westerners, Europeans, coming to Australia and dramatically changing the space. Not only bringing introduced species, but also having a dire effect on the indigenous peoples there. As a culture, we haven’t come to terms with that.”

Learn more at The Artery. 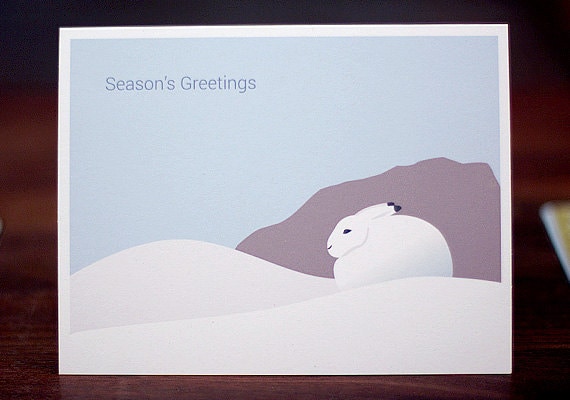 Just in time for the holiday season, Grizzly Bear Greetings is offering a coupon to My House Rabbit readers for FREE SHIPPING on any of their Christmas cards. Just use coupon code MHRFREESHIP at checkout to take advantage of the promotion.

All cards are printed on 100% recycled card stock with a matte finish. Cards measure 5.5 x 4.25 inches when folded. Each pack includes six cards and six A2 white 100% recycled envelopes. 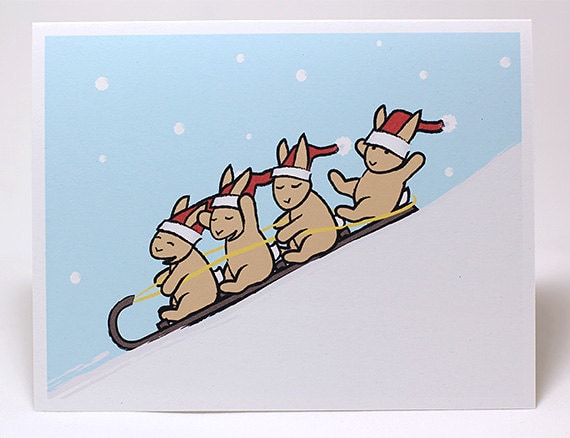 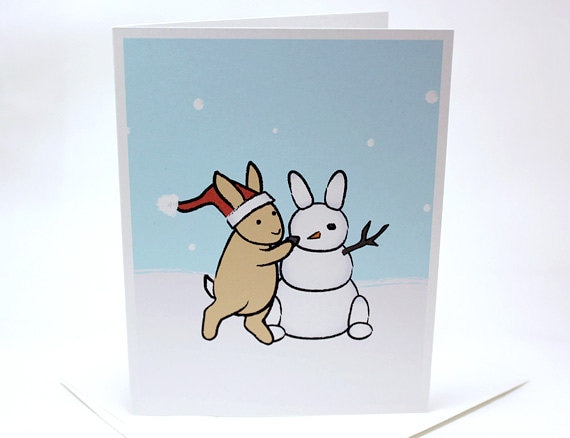 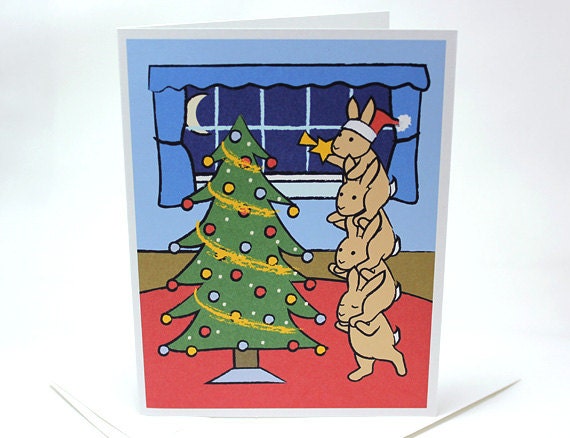 Small Pet Select is offering My House Rabbit readers a fantastic holiday special.  Use the coupon code BUNNYRING when you order hay or pellets, and you’ll get a free bunny ring plus free shipping!

In addition to the tiny rabbit sculptures invading cities near you, now there’s another kind of art bunny to look out for. These 4-meter high, bubblegum-pink rabbit sculptures are taking over the city of Brisbane in Australia as part of the Brisbane Festival, September 9-28.

The large bright pink bunnies are the vision of street artist Stormie Mills. Cast out of polyurethane, the outer pieces are supported by a steel internal frame and plastic subframe.

Said Mills, “It’s like a vinyl toy in a sense, but a bit tougher and certainly a whole lot larger. The last step is that somebody goes in and tightens everything up from the inside, crawls back out the bunny’s bum and we glue the tail on.”

Tiny Bunny Sculptures Take Over Cities Around the World

We hope they will stop people from their daily routine and for a brief moment, make them wonder about their mysterious, newly found gift, and a small piece of the beautiful world that surrounds them.

The public is encouraged to get involved in the project. To find out if a city near you is participating in free Mysterabbit giveways, see the Mysterabbit website.

Birthday coming up? Time for a tea party? Just want a reason to get together? As a rabbit-lover, a bunny-themed party might be right for you. We’ve put together a few things that might help you out.

Peter Rabbit Cake
A recipe from McCormick made from two 9-inch round cakes.  The recipe simply calls for cutting up one of the cakes to create the ears and body.

Food Network Bunny Cake
A more 3D cake made with two 9-inch round cakes from the Food Network.

Win this personalized bunny print by entering our giveaway contest!

Just in time for Easter, My House Rabbit and Grizzly Bear Greetings are hosting a giveaway for a personalized bunny print! Customize this design with your child’s or pet bunny’s name and select one of four bunny colors: brown, white, grey or black. (See color choices here.)

This vibrant design is printed on heavyweight 100% cotton rag, acid-free paper with a matte finish. Print measures 8 x 10 inches and is centered on an 8.5 x 11 inch sheet. Giveaway is for print only. Frame and mat not included. Colors may vary a bit from your screen vs. the actual print colors.

Learn more about this print >

UPDATE: Congratulations to our winner, Becky S. and her bunny, Babs.

Congratulations to Amber who won our Bunny Holiday Card Giveaway!

I always tell new rabbit owners: when trying to understand bunny habits, think of a rabbit more like a cat than a large hamster. They are much more curious, interactive and clever than I think most people anticipate.

Here are a few more responses:

For all the great answers, see the comments on our giveaway post. It’s that time of year again! It’s time to think about sending out those holiday greetings.  We’re hosting a giveaway featuring a set of six bunny holiday cards by Grizzly Bear Greetings.

You can choose one of the following three designs (or create an assortment of all three):

UPDATE:  Congratulations to our winner Amber!

Here’s a special pumpkin we carved  for bunny lovers for this year!