Today is Earth Day! To celebrate, here are two articles relating to bunnies AND helping the environment.

7 Ways Rabbits are Environmentally-Friendly Pets
There are many benefits to owning a pet rabbit: they’re utterly adorable, they’re funny, they’re quiet, they’re clean… I could go on and on. But one thing many people may not realize is that rabbits are ecologically-friendly pets. [Read more]

Bunny Gardening for Beginners
One of the great things about owning a pet rabbit is that you can grow a lot of their food yourself in a backyard garden. In fact, you don’t have to be a master gardener or own a huge plot of land to grow a few of your bunny’s favorites. [Read more] 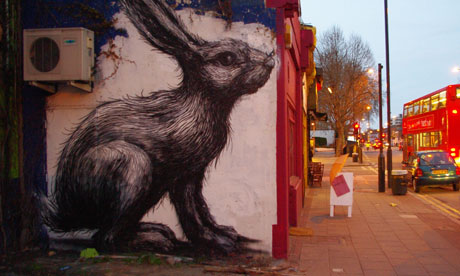 A rabbit painting by the artist ROA on the side of a recording studio in Hackney, England was faced with the threat of being removed due to anti-graffiti efforts. After an outcry from residents and a petition signed by over 2000 people the council changed their minds.

ROA is a renowned street artist from Brazil. His pieces have been painted on buildings, boats, and just about any paintable surface all over the world. He was given permission by the building owners to create the mural.

For more about the rabbit of Hackney, check out Dalston People.

September 26th is International Rabbit Day. The day is set aside to celebrate rabbits and promotes the protection and care of rabbits both wild and domestic.

Chapters of the House Rabbit Society will be celebrating worldwide. Be sure to check out their site to find an event near you.

We’ll be celebrating Coco and Cosette the same way we do every day with cheek rubs, a hearty meal of greens, and a few annoyed glances while they inevitably chew on the molding. Okay, okay, maybe we’ll give them an extra treat. Whatever we do, we’ll be sure to let them know that we appreciate the fun and love they bring into our lives. 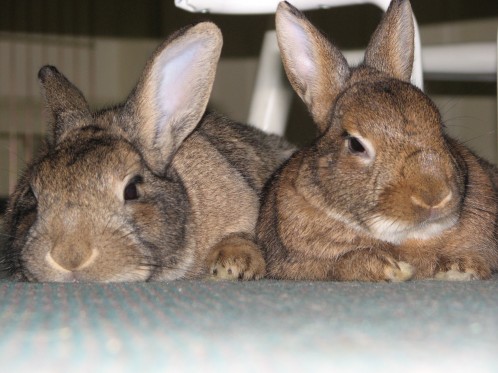 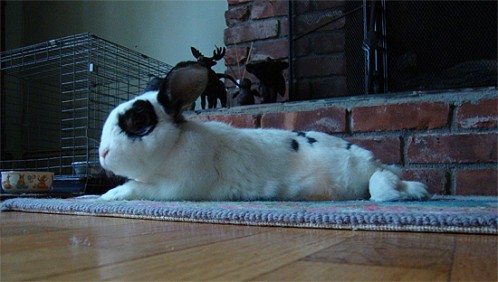 Buka joined our family way back in 1996. We didn’t know much about his origins or how old he was when he came home with us. All we knew was that he was purchased as an Easter gift at either a fair or a flea market – some venue like that. As a gift he was not wanted – no one was willing to take home and care for a rabbit. With a little begging and big hearts, we convinced our parents to take him home.

We drove home with Buka in the wooden crate he was purchased in. We had no idea how to feed and care for a bunny, but we knew he was going to be a part of our family. At home we gave him a bit of lettuce and left him the crate, which was closed with a piece of wire. The next time we checked on him he was sitting on top of the crate, ears up, surveying the living room.

We called him ‘Bunny’ and ‘Bunny Boy’ (even though we had no idea what his gender was) and ‘Buka.’ There was no official naming session. We still call him variations of all three names. I’ve taken to just calling him Bu. He responds to any of several names. Like everyone else in my family he is burdened with many nicknames.

We learned, mostly through trial and error, how to raise a house rabbit. We learned that iceberg lettuce is not good for rabbits. We learned that rabbits love to chew, especially lamp cords. We got him a cage and, at first, kept him in there at night. He hated being cooped up. He would rattle the door until someone opened it. We soon learned that Buka would be fine on his own hopping around while we slept.

We also learned that Buka had a playful personality that has come to define his role in the family. He loved to rocket down the hall into an open bedroom and looping around under the bed and zooming back out. He loved to do figure eights around my legs while I stood in the dining room.  We made up games together like ‘Chase.’ Buka would start on one end of the living room while I stood in the middle. He would then run full speed while I feigned trying to catch him. He’d get to the other side and plot out his return. Buka had boundless energy.

Old friends ask how he is when we talk. Visitors to my parents’ house seek him out to say hello. He’s a celebrity – a novelty in a world of cats and dogs.

These days Bu is showing his age. Fourteen is very, very old for a rabbit. Old age has set upon him with heartbreaking swiftness. He doesn’t run anymore. He can no longer hop onto my parents’ bed to tell my mother it’s time to greet the morning.

Today I was on my way to work when I got a call from my mom. My parents are away and had received a call from my sister. Buka couldn’t move one of his paws. I stopped by the house to check on him. He looked uncomfortable and stiff, but was alert. He turned when I called him and leaned into a cheek rub. I had Abi come down to check on him because I had to head to work and could only stay a minute.

He was up and hopping with all four paws when she got there. He was eating normally, picking out the tastiest pellets.

I suspect he’s developed arthritis. It’s heartbreaking to see him in any pain.

I advised my sister, as I would any rabbit owner, to take him to the vet. At best, they can give him medication to reduce inflammation and pain. At worst, well, I’d rather not think about that yet.

We decided to build another 4×4 raised bed devoted just to lettuces and other bunny greens. They really do consume a lot.  So yesterday I planted three different kinds of green leaf lettuce, more cilantro, and some basil plants.

In the fall, we’ll do another round of romaine lettuce, plus we’re going to try growing some bok choy as well. 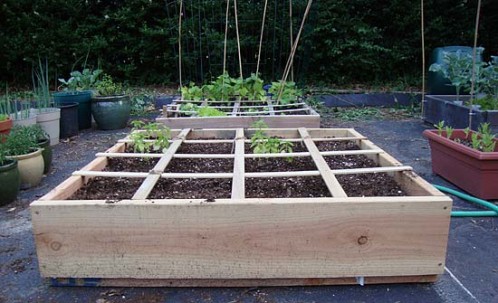 In our new raised bed, we planted three different kinds of looseleaf lettuce, basil, and cilantro. In the background, we have a pot of mint, more lettuce, and carrots growing in the raised beds behind. 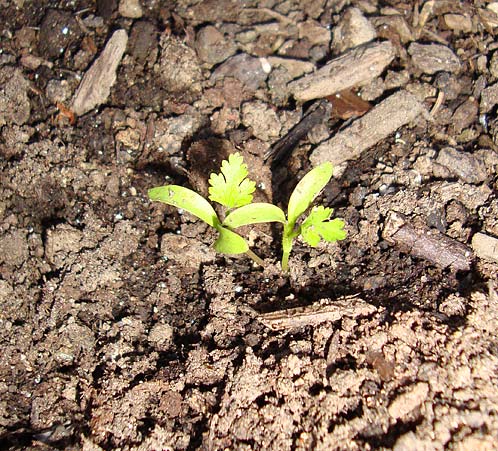 The cilantro I planted a few weeks ago in one of our other beds germinated.  So Cosette will be happy in a little while when it’s big enough to eat.

On Feb. 24 the Grayson County Humane Society in Kentucky was broken into. A cash box was taken during the break-in. What is truly horrifying is what else the culprits did. Dogs and cats were beaten and killed. Several weeks prior to this break-in, someone sneaked into the facility and released all of the dogs.

The shelter is looking for any information that may help catch these criminals. They ask that those with tips contact the Leitchfield Police at 207-259-3850.

In addition to information, the shelter is seeking donations and people willing to foster animals during this time.

To help and to read more, visit their website: http://www.graysonhumane.org/.

Out of a Forest

Out Of A Forest from Tobias Gundorff Boesen on Vimeo.

This is a rather sad, yet beautiful, stop-motion film about rabbits made by film-makers in Denmark.

St. Nick came to a PetSmart in Ann Arbor, MI to pose with pets and raise money for the Great Lakes Rabbit Sanctuary.

PetSmart donated supplies needed for the event and volunteers from the sanctuary helped out as well.

Among the animals that came out for photos were an antler sporting turtle and a baby St. Bernard.

About 500 dollars was raised for the Great Lakes Rabbit Sanctuary.

The Luv-a-Bun Rescue in Lake Worth, FL has recently taken in 34 bunnies rescued from a mobile home. The rabbits were crammed into 3 cages jammed with both living and dead rabbits.

Several of the rabbits were relative newborns and many had never been able to hop due to the cramped conditions.

The recently taken in rabbits have been spayed and neutered by local veterinarians Renata Schneider and Stefan Harsch free of charge.

Visit the Sun Sentinel for more on this rescue. 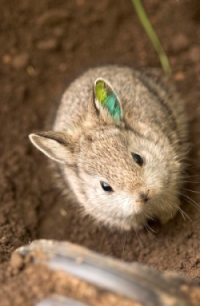 The Columbian Basin pygmy rabbit has been on the state of Washington’s endangered species list since 1993. The population declined so much that biologists took in the last 14 wild rabbits to create a breeding program.

Among the institutions collaborating in the breeding program is the Oregon Zoo, which has been breeding Columbian Basin pygmy rabbits since 2000.

This year the zoo welcomed 26 endangered kits, or baby rabbits. This brings the total to 73 kits for the year among all the breeding programs.

Read more about the program at Zoo and Aquarium Visitor.