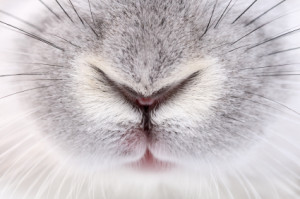 Rabbits are relatively quiet creatures. As prey animals, it’s in their best interest to not draw too much attention to themselves. That said, they do have a unique way of communicating, from binkying to nose bonking to flopping. We’ll explore rabbit behavior here.

People unfamiliar to pet rabbits may not know that bunnies have a very dramatic way of expressing excitement and joy. They dance! Leaping in the air, contorting and twisting their bodies, and kicking their feet out, binkying rabbits are quite the spectacle. Sometimes rabbits lead up to a binky by taking a running start. Other times, a binky is a sudden burst to the side. What’s really fun is when the binkies occur in succession, creating a grand acrobatic display. I’ll submit that anyone who thinks rabbits are dull has not seen a bunny in the act of binkying.

When rabbits zip around the room in a blur, they’re performing Bunny 500s. Their bursts of speed are sometimes accompanied by fantastic binkies and demonstrate extreme excitement. Expect a Bunny 500 whenever you’re about to give your bunny a treat.

A bunny at ease will often flop in contentment. Sometimes there’s a buildup to the flop as a bunny turns his/her head a few times before finally rolling over completely onto his/her side. 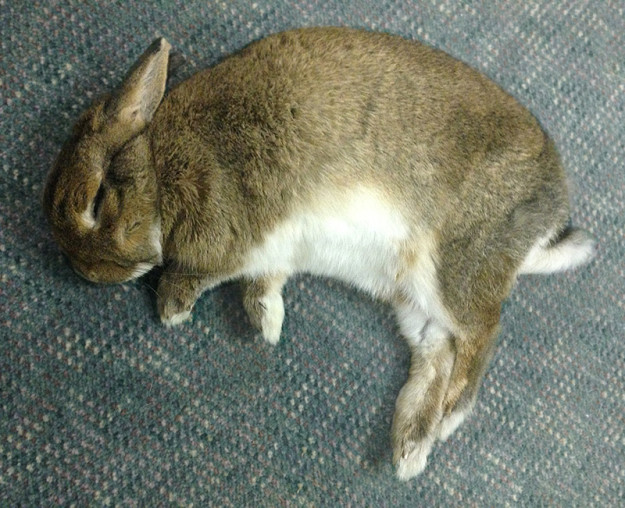 Bunnies show affection by licking (grooming). You’ll often see pairs of rabbits grooming each other, which demonstrates they have a strong bond.

An excited rabbit may make honking / buzzing sounds while circling. This signifies happiness, or when done around another rabbit, it could also signify sexual excitement.

Bunnies sometimes show their enjoyment if you’re petting them by grinding their teeth. This is a rabbit’s way of purring. But teeth grinding can also signify discomfort or pain. Grinding due to pain is often louder and more frequent than grinding due to contentment. You’ll be able to tell the difference by observing other behavior in conjunction with the teeth grinding. For example, if the rabbit is lying down with his/her feet stretched out in a relaxed way, then the grinding demonstrates contentment. But if the rabbit is hunched and tense, doesn’t show an interest in moving or eating, or shows aggression, then the grinding signifies pain.

Grunting or growling is a sign your rabbit is angry or stressed. You may be invading their territory, and they’re telling you to back off. Aggressive behavior will most likely ensue, so watch out.

Rabbits generally only scream when dying or in extreme pain. Seek veterinary assistance immediately if this occurs.

Displeased rabbits may deliberately kick their feet up as they hop away from you. In a wild setting, this translates to kicking dirt into another animal’s face. Expect to get imaginary dirt kicked up at you after a nail trimming session.

Chinning is a rabbit’s way of saying, “Mine!” They rub their chin, which has special scent glands, on objects to mark their territory. 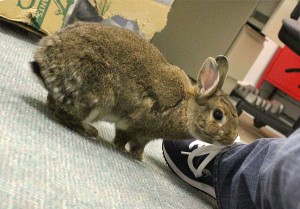 Rabbits explore their environment by sniffing and nudging. It may be a greeting or their first line of investigation. But nudging can also indicate a level of bossiness. Your rabbit might be telling you, “You’re in my way!” They may also be trying to get your attention because you’re not petting them. Sometimes if the nudge is ignored, they follow up with a nip.

Digging on your legs or feet is another way rabbits try to get your attention. “Petting me takes precedence over that important phone call!” they’re saying.

Rabbits often nip in order to get attention. In this case, they don’t mean to cause you harm, but nips are at the very least annoying. So to discourage this behavior, shriek every time it happens. The nips will become softer and less frequent, and eventually the behavior will be discontinued completely. But sometimes rabbits nip in an aggressive way. Perhaps you’ve put your hand into your rabbit’s space, and he/she’s feeling territorial. Aggressive behavior can be diminished by spaying or neutering your bunny.

Rabbits thump their hind legs when they sense danger. It serves as a warning signal for others in the area to watch out.

Although rabbits may not have a signature sound like a bark or meow, they do express themselves in their own unique way. It’s just up to you to listen properly!

Abi Cushman is a veteran house rabbit owner and a contributing editor of My House Rabbit.

When she's not writing about bunnies for My House Rabbit, Abi writes and illustrates funny books for kids, including Soaked! (Viking, 2020) and Animals Go Vroom! (Viking, 2021). And yes, there are bunnies in them.