Well, sort of. There aren’t any ferocious beasts of Monty Python caliber, but rabbits are being blamed for munched-on wires in the Denver Airport parking lot.

Dexter Meyer had parked his new Volkswagen Jetta in the airport parking lot while away on a nine day vacation. Upon his return, Meyer was greeted with blinking lights when he started his car. A trip to the dealership found that wires had been chewed through. The mechanic suggested a rabbit was the culprit because he had seen a few cars brought in from the airport with chewed wires.

The airport has a fence around the lot, but apparently the rabbits are too sneaky to be kept out by it. If those wild rabbits are anything like our two troublemakers wires are too tempting to not be chomped. 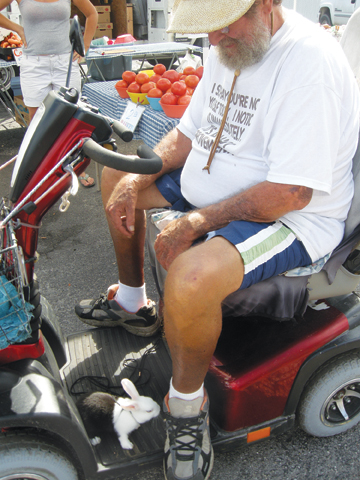 Biscuit is a 2 lb Dutch with an unusual means of transportation, a scooter. Biscuit accompanies her owner on his scooter while he travels to work at a produce stand. There she becomes the center of attention as people stop by to say hello and watch her sample the wares.

Her owner, Coleman Rogers, has had house rabbits for pets for the last 17 years. His first was left at his house by a friend, and he was soon hooked on raising rabbits. Each of his rabbits has been litter box trained and cage-free. Biscuit spends most her time in Rogers’s kitchen.

Ollie Parris visited Beech Tree Bunnies, a rescue in Leicester, and came home with two guinea pigs. He also came home with an idea; Ollie wanted to help the rescue. So Ollie took to the streets on his bike for a sponsored ride.

Ollie rode for two miles while his father jogged behind. He raised 217 pounds for the rescue.

His parents are very proud of what he has achieved.

Beech Tree Bunnies was formed six years ago and relies on donations to care for its current group of 30 bunnies and 10 guinea pigs. Visit the rescue at their website, www.beechtreebunnies.co.uk.

Lily gives us some tips of caring for your pet bunny, with her bunny, Savannah. 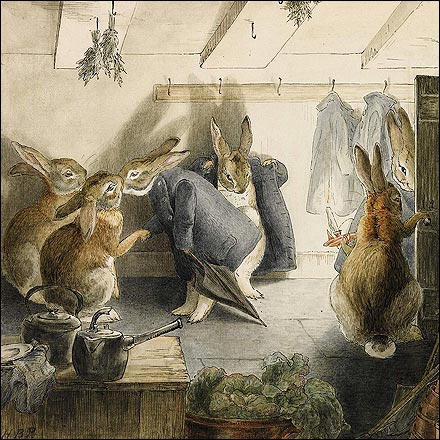 This Beatrix Potter watercolor recently sold for a £289,250, a record for a book illustration. The Rabbit’s Christmas Party was painted by Potter in the 1890s and was sold to a private collector.

Parents will be hardpressed to resist these adorable bunny scooters from Mahar Drygoods for $180.00. The scooters are made to order by Roebuck Studio of Chelsea, MI in an environmentally-friendly way. You can either select a color from a wide range of choices for the two bunny cutouts, or you can choose a clear finish to let the natural wood coloring shine though.

Well, I don’t actually like chocolate, so I can’t confirm if dairy-free, egg-free chocolate Easter bunnies taste similar to non-vegan chocolate bunnies, but I did find a comprehensive list of them for all the vegans out there.

They have since published an addendum to the list: http://www.godairyfree.org/200803072327/News/Nutrition-Headlines/Introducing-New-Members-to-the-Dairy-Free-Chocolate-Bunny-Family.html