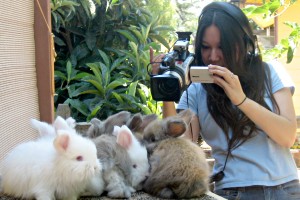 After filming behind the scenes action for Lucas Film productions, Amy Do decided to branch out into something more earthly, rabbits. Her new documentary, Rabbit Fever, explores the world of rabbit showing. Do follows the competitors at the National American Rabbit Convention over the course of five years. Each year 20,000 rabbits are entered into competition for Best in Show, Rabbit King, and Rabbit Queen.

The film premiere coincides with the 100th anniversary of the American Rabbit Breeders Association.