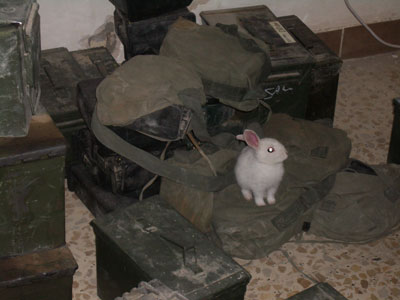 I found this story on Twitter posted by @Houserabbit about Carolyn Schapper, an Army sergeant serving in Iraq, who took a pet bunny under her wing. The rabbit had been maltreated and suffered from singed fur and whiskers, and so Schapper decided to take him in. Once on base, the rabbit was giving the name, Combat Infantry Bunny or CIB (pronounced “sib”). The name is a play on the military acronym CIB which stands for Combat Infantry Badge.

As time went by in Iraq, Schapper came to realize how important her bond with CIB had become. Although she knew she could depend on her fellow soldiers, she had lacked an emotional connection to anything. CIB filled that void.

Listen to the full story here.