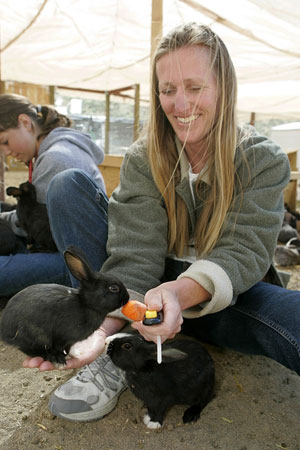 Andrea Bratt Frick has been clicker training rabbits since she adopted a bunny named Filbert who was able to jump 36 inches. She used a clicker to train Filbert to use his leaping ability to clear hurdles. She uses the clicker to signal the rabbit to do a trick, which is followed by a reward. The reward is dependent on the rabbit, some rabbits like particular veggies or pellets, while others are satisfied with a nose rub.

She also uses the clicker to help abused or neglected rabbits become comfortable around people. Clicker training helped these rabbits become less aggressive and more willing to be handled by humans. Frick works with the rabbits at Bunnies Urgently Needing Shelter in Santa Barbara, CA.

Read the full article at The Examiner.