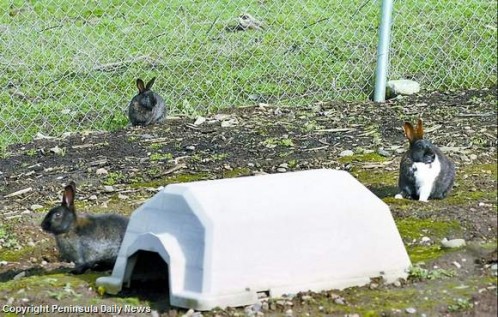 In the summer of 2007, Ralph and Caryl Turner took in 100 domestic rabbits that had been released into public parks in Seattle. The Seattle Parks Department had neutered and spayed the group, and then the rabbits moved into a 1-acre run at Precious Life Animal Sanctuary in Sequim, Washington. Within the predator-proofed, fenced-in area, there are small shelters, and the rabbits have dug several burrows.

There are several cities that have feral rabbit problems, including San Diego, Sacramento, and Vancouver, but many have resorted to euthanasia as a solution. Seattle and Precious Life Animal Sanctuary have taken a humane approach to the issue. And although the bunnies at Precious Life require a lot of space and a lot of care, going through a hundred pounds of feed a week and a bale of hay every other week, the Turners say the rabbits help “keep them young.”

Like many shelters, they rely on donations and volunteers to keep the sanctuary running. Learn more at the Precious Life Animal Sanctuary website and the Peninsula Daily News.